Πε­ρί­λη­ψη  Saint John Climacus (who was an abbot in Holy Monastery of St. Catherine on mountain Sinai), is the writer of the famous ascetic treatise “The Ladder of Divine Ascent” (literal-ly, the ladder of the virtues. In this classic work, Saint John describes a wise method for waking man up from the sleep of ignorance and for approaching God, through the spiritual way of life. During this fight against his ego, man must try to progress through a scale of thirty <30> virtues, in order to reach the last steps of the “ladder”, which is the acquisition of faith, hope and, finally, love. According to the teachings of the Orthodox Christian Fathers, Psalmody is a very useful tool, a necessary instrument for everyone who wishes for his soul to be saved. It is a very good way for praying, thanking and glorifying the Holy Trinitarian God. In addition, Saint John Climacus describes not only the positive effects of Psalmody on the human soul, but he warns the faithful about the dangers which they may face if he does not make the right use of Psalmody. That means that in man’s soul there are many passions, like coquetry, vanity, egoism, egocentricity, bad pride and many others, which can turn Psalmody from an instrument for salvation into an instrument for the soul’s perdition and death.

Πε­ρί­λη­ψη  The term ‘notation’ indicates the spelling of Byzantine Ecclesiastical Music, meaning all the signs and symbols which are used to write the musical chants of Psaltic Art as well as for the musically performing of them. The notation which was born on the 10th AD century was stenographic and mnemotechnical, while it remained firm and unchanged from the 12th to the 18th century, maintaining the traditionally Byzantine melodies stable and unchanged as well. Since the 17th century a tendency for the first ‘explanation’ attempts of shorthand notation are observed in handwritten musical sources. This whole attempt was materialized in a more methodical and systematical way, by large post-Byzantine composers and teachers of psalmody of the 18th century. Today, the significant notation system of Byzantine music is studied with great interest by musicologists and paleographers of the largest universities in the world. The findings of these studies enrich our knowledge of the musical past of the Orthodox East, but also contribute to the understanding of the musical system of modern Chanting art, the so-called New Method of Analytical Notation, which has been introduced since 1814. It is in this New Method that many of the most important masterpieces of sacred music creations of Byzantine and post-Byzantine era have been transcribed into.

Πε­ρί­λη­ψη  The workshop presented a method for rapid learning of contemporary Psaltic Art (Byza-ntine Music). This method enables learners to quickly familiarize with the currently used music notation of psalmody, so that at very early stages participants gain access to “prima vista” reading of the byzantine music scores, and therefore read easy hymns and chants soon, and can also distinguish different scales and understand the general theory of Byzantine Music. The method is ideal even fior teaching large groups and has been applied successfully by the signatory for 30 years of teaching, speculation and “experimentation” in individual or group lessons in music schools, conservatories, but mainly seemed to be particularly fruitful in its implementation in the Musical School of Volos and the Department of Music Studies, AUTH, and furthermore, it is now applied to the Supreme Ecclesiastical Academy of Athens. This method proved to be very effective in short-term training programs and educational seminars for Primary and Secondary education. 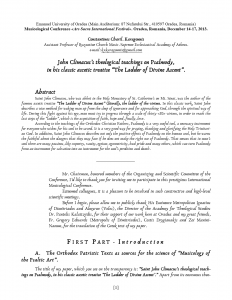 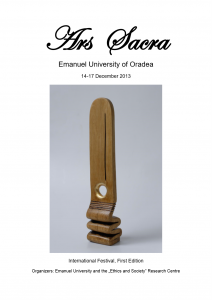